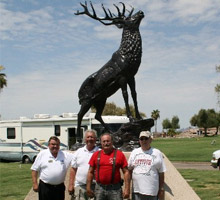 Elks Lodges bring so much more to their communities than just a building, golf course or pool. They are places where neighbors come together, families share meals, and children grow up. Elks invest in their communities through programs that help children grow up healthy and drug-free, by undertaking projects that address unmet need, and by honoring the service and sacrifice of our veterans.

The Benevolent and Protective Order of Elks supports Veteran Programs and is proud to announce “So long as there are Veterans, the Elks will never forget them”

One day in the early days of Lake Havasu City, Gus ( congenially known as the general) and Rose Rosencans with Leo and Lucy Despres were meeting over coffee and the subject of an Elks Lodge was discussed. The seed was planted and Lake Havasu City Elks Lodge No. 2399 started to materialize.

A charter was applied for through Grand Exalted Ruler Robert E Boney by Leonard Harris, Stewart E Sagre, Nicho-las Arenziano and 101 others and on July 29, 1968 dispensation for a new lodge was granted by Grand Lodge Secretary Lauen Gitpa. Lake Havasu Elks No. 2399 had been formed! Lake Havasu City Lodge then became the 35th lodge in the state of Arizona.

On July 27,1968 173 members were initiated into Lake Havasu City Lodge Number 2399 in ceremonies held in the new and unoccupied Post Office Building. The building was without air conditioning so these individu-als had to be dedicated to Elkdom to survive Lake Havasu City heat in July for an initiatory ceremony. The initiation was conducted by officers of the Parker lodge which was Lake Havasu City Elk’s mother lodge.

The newly formed lodge members held meetings in whatever facility was available each week—– the schools, the bowling alley or local restaurants until the building on Mulberry Avenue was acquired. A party of local Elks worked hard to get the building ready for the first meeting and more than 40 Elks were present to enjoy the new surroundings. The first meeting in this newly acquired facility was held in October of 1968 and this building was used until 1973 when after much hard work raising money, and acquiring land the present facility was built.

The new lodge was truly a cooperative effort. Shares were purchased by the members to help raise funds (The shares were repurchased as money became available.) and all of the work was volunteered. A truly unselfish endeavor! Shortly after the dedication Gus Rosencrans died of cancer just after the new foundation was laid. One year later Lucy Depres passed away and several years later Rose and Leo were married. A truly interesting human interest story!

Check the Calendar for Entertainment at the Lodge!